A few weeks ago, you may have heard about, seen or even participated in a little thing called the Global Climate Strike, where over 1,000 people took to the streets of Basel alone, and millions more around the world protested for “an end to the age of fossil fuels and climate justice for everyone.”

That’s what I’m talking about. 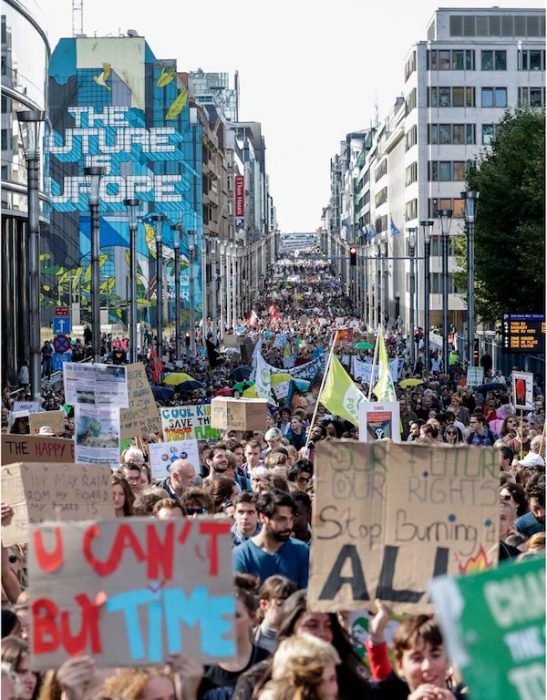 I’m excited that the demand for immediate climate action continues to build, but I’m most inspired by one aspect of this particular strike — it all began with the actions of one teenage girl. Friends, if you’ve ever doubted that your vote really mattered, or thought, “how could I alone possibly make a difference?” then I hope this story shatters that opinion.

If you’ve yet to hear about Greta Thunberg, she is a Swedish teenager whose story blew up on social media when she protested outside the Swedish Parliament on August 20th, 2018 at the age 15. Rather than attending school, she sat outside the Swedish Parliament every day for the three weeks leading up to the 2018 Swedish general election with a sign saying “School Strike for Climate.” Her demands were that the Swedish government reduce carbon emissions in accordance with the Paris Agreement. It’s worth noting that her protest began after the heat waves and wildfires during Sweden’s hottest summer in at least 262 years.

She also had leaflets available for people who passed by explaining why she was protesting: “I am doing this because you adults are shitting on my future.” You’ve got to love her honesty! As her protest gained momentum, she was invited to give speeches at a variety of forums which enabled her to expand on her concerns. She even addressed the 2018 United Nations Climate Change Conference, which sparked student strikes every week thereafter somewhere in the world.

She has also stated that politicians and decision-makers need to listen to the scientists.

Thunberg has been diagnosed with Asperger syndrome, obsessive–compulsive disorder (OCD), and selective mutism.

While acknowledging that her diagnosis “has limited (her) before”, she does not view her Asperger’s as an illness and has instead called it her “superpower.”

She stated: “I was diagnosed with Asperger’s syndrome, OCD and selective mutism. That basically means I only speak when I think it’s necessary. Now is one of those moments.”

But she doesn’t just speak — she speaks her mind clearly and with blunt honesty. In her speeches before government bodies, she doesn’t put it mildly that they’ve been valuing money and greed above the very future of humanity and the planet.

At home, Thunberg convinced her parents to adopt several lifestyle choices to reduce their own carbon footprint, including giving up air travel and not eating meat.

Also part of her messaging is that the 1.5 °C commitment as part of the Paris Agreement is insufficient and that the greenhouse gas emissions curve needs to start declining steeply no later than 2020. In February 2019, at a conference of the European Economic and Social Committee, she said that the EU must reduce their CO2 emissions by 80% by 2030, which is double the 40% goal set in Paris.

Now, none of this is news to politicians – or at least it shouldn’t be. Scientists have been presenting their data for decades. But apparently getting shamed by a young person who so clearly sees that her future is in their hands, is hitting a chord. Other students around the world are following her lead, and if we’re lucky, Thunberg’s bold voice will finally be a catalyst for sweeping government action.

Now, I don’t mean to depress or overwhelm you, people! Yes, time is of the essence, we need major action to mitigate the worst of climate-change catastrophe, like yesterday! But there is action you can take right here, right now.

When we choose veggie option over meat, we contribute fewer emissions; when we bike rather than drive, we are doing our part. When we buy second-hand clothing and furniture rather than new, we are reusing materials and resources already in circulation, therefore contributing positively in a number of environmental ways (not cutting down trees, fewer chemicals in adhesives and paints, no emissions during shipment to name a few).

And for those of you who want to turn your innovative ideas into action, you’re in luck.

Climathon is a 24 hour solutions-hackathon that happens in over 100 cities around the globe, and there is one happening in Basel this year–and guess who is hosting? Mark your calendars, people — Oct 25-26 at Impact Hub Basel, community members, activists, parents, students, entrepreneurs and more will come together with the goal of solving three climate challenges our city is facing.

In other words, it is the perfect chance to be part of the solution, my friends. Get all the details and register here.

It’ll take everyone to secure a better future and avert the worst of the climate crisis. What happens next is up to us. It is, in fact, each individual that holds the power to make change.

One of my favorite quotes is from Margaret Mead and I’d like to end by sharing it with you: “Never doubt that a small group of thoughtful, committed citizens can change the world; indeed, it’s the only thing that ever has.”

So, like Greta Thurberg, let’s all embrace our own superpowers.