Our circular economy event, focused on the future of agriculture and food, highlighted the importance of technological innovation, as well as an anticipated shift to strengthen the connections between agriculture and society. That said, the idealistic visions for the future differed in one major way – who or what will take care of food production.

Starting the morning with French press coffee and pastries is always a good idea. We here at Impact Hub Basel like good ideas and having fun, so we followed the introductory presentation to our event with a word association game. The game revolved around food and agricultural system optimization, in a socially focused way. Insights gained, involved increased transparency, greater consumer awareness, localization, and a more integrated use of technology. Mixing agricultural developments with social and cultural themes lead to enthusiastic conversations, even before the second cup of coffee. 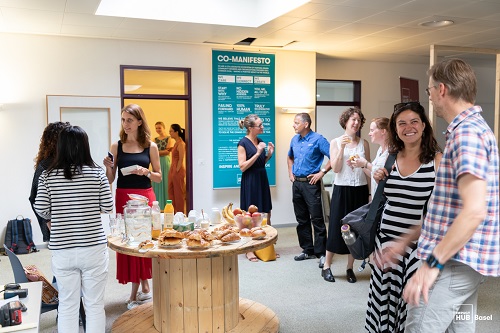 The event continued with a discussion of the results before breaking into teams – one to discuss the future of agriculture, the other for that of food. The first few minutes were spent brainstorming, then straight into a deep dive on how an ideal world could look in 2050. The goal of the session was to create a storyline explaining how this future is run and give some insight as to how society developed to reach that point.

In the agriculture track, a society where individual involvement in food production is replaced with technological advances, like robots and artificial intelligence, was generated. These advances would give way to polyculture (multiple crops grown in the same space), autonomous food delivery, and smart fridges. Systems determining the availability of certain foods in the short-, medium-, and long-term would be able to distribute resources most effectively and efficiently. As well, technological involvement in food preparation would change the working culture, therefore allowing more time for individuals to build relationships with their community, or do other, more impactful, social tasks.

Moving to the food track, a similar society was built – the traditional 9 to 5 job culture would be replaced with universal basic income. Differently to the agriculture track though, people would spend around a third of their resources (time, education, finances) directly in food production. Communities would have shared gardens, collaborate with each other in food preparation and distribution, and engage heavily in local social media. Technology would be used to supplement the nutritional component of food (through smart watches giving micro and macro nutrient levels), as well as 3D printing. And with all these features, a storyline was written. 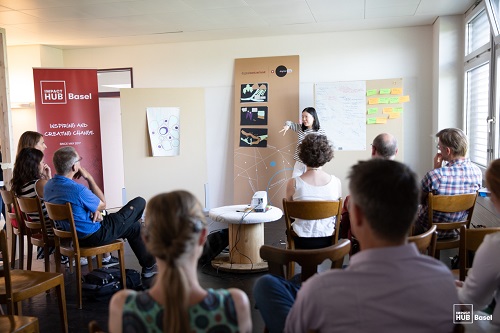 When the groups merged again for final presentations and discussions, a few key learnings were apparent. The importance of identifying the existing food and agricultural structures in Switzerland, as well as short-term developments, was emphasized, before potential long-term plans could be explored. Changing society’s approach to working and improving the work-life balance was also highlighted. Reducing food waste, as well as greater awareness of the food cycle, and its issues, was stressed. Lastly, attention was drawn to a more integrative connection between technology and society, under the guise of “co-living.” Our in-house design expert created and presented some inspiring visualizations relating to these topics. The event ended with a wonderful apero lunch, and a new outlook to the future of food and agriculture.

Thank you to everyone who participated in our session – we can’t wait to see you at future Circular Economy events! And until then, happy farming and/or eating!