I think I’ve always been an environmentalist, even if I didn’t know what that was. From the time I was seven, riding my yellow banana-seat bicycle to Rich’s Country Store for Twinkies (don’t judge me), I remember feeling indignant seeing litter on the side of the road. I also have memories of reminding—well, yelling at—my older sister to turn off her light when she left her room. So, when I look back at my path in life, it isn’t surprising that with my artistic background and love of working with my hands, I’ve come to want to design and build my own eco home. What that would look like was, and is, anybody’s guess. I just know I want to do it.

Recently, I took a step towards this dream by participating in a week-long straw bale workshop. In my head, the words cob, adobe and straw bale were sort of in the same category of ‘house made of dirt and straw.’ I may be exaggerating a bit, but not much! I still don’t know the ins and outs of cob and adobe, but people, I’ve now got some serious knowledge about straw bale! 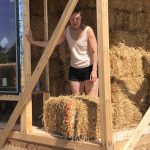 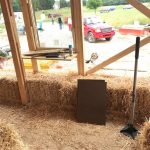 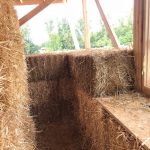 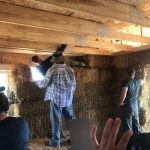 Finding a creative solution to fitting in the last, difficult, row of bales 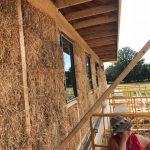 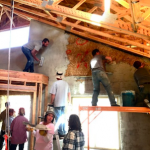 There are many myths and misconceptions about what straw bale is and what it isn’t. For instance, our fearless leader, Andrew Morrison, informed us of a myth that a straw bale house can be heated with a candle and a fart (my inner 12-year-old is giggling as I write this). While this is not exactly true, straw bale IS extremely well-insulating, so the need for supplemental heating and cooling is greatly reduced. Not only does this save the homeowner money each month on their energy bills, but it means fewer resources are used overall, be it from oil/natural gas or the finite materials used in solar panels (which sounds like a future blog!).

The workshop started on Sunday morning, 21st of July in Ann Arbor, Michigan. Since I’d be camping all week, I arrived on Saturday afternoon, as did about 15 others. Unfortunately, it had been rainy and a tornado watch was in effect, so camping was out of the question. Our gracious hosts, Selena and Thomas, put all of us campers up in a meditation room/house behind their current home.

One by one, participants trickled in, getting shuttled around by Selena and some generous local participants. We ended up at a fun spot in downtown for dinner, and quickly began getting acquainted. At the table was the workshop facilitator and teacher, Andrew Morrison, who resides in Oregon and Mexico, a couple from New Jersey (technically one was still living in Portugal, but he was moving soon), a woman from Taiwan, another from upper New York, some people from further away in Michigan, a man from Denmark, and me, from Switzerland.

Andrew Morrison, Baler Extraordinaire, led the troops. We were about 45 strong on Sunday morning (not everyone could stay the whole time, so we were about 40 after that). Our hosts fed us a healthy, expansive breakfast buffet and hot coffee, and we got to it. Some fun, get-to-know-you name games and an informative Q&A with Andrew filled the first couple hours while we waited for the first straw bales to arrive (the owners had purchased them a year earlier from a local farmer and had them in storage. Moisture content in bales is very important, and we had many questions about this. You can read more here.)

Once the bales arrived it was all hands on deck. Because of rain in the forecast, we had to stack them inside the house. This meant extra hauling here and there during the week, but with our many hands, it was quick work.

We then eagerly learned our first task—re-tying bales. The ‘butcher’s knot’ is simple, effective–and frustrating to master! But it does involve something dubbed ‘bale humping,’ which at least kept us laughing. And a tightly strung bale is important in order to keep the excellent insulating factor that is inherent in straw bale homes. So, tying and bale humping we did…

Once we squeezed as many dirty jokes out of it that we could, and cursed many a mis-tied knots, we got an introduction to the art of ‘de-pillowing.’ Friends, this involved using a chain saw. While I am no stranger to power tools and feel sort of like a bad-ass using them, I’ve never been too keen to get my hands on a chainsaw. Because…well, it’s a chainsaw. However, that being said, I decided I absolutely was going to do just that. What was I doing at this workshop if not grabbing onto every learning opportunity, no? 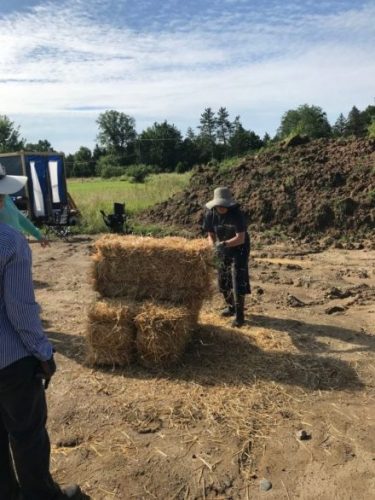 Sheila rockin’ the chainsaw, de-pillowing bales to ready them for installation

Basically, de-pillowing bales is making them more rectangular by eliminating a bit of the ‘puffiness’ on each end. I don’t know if you know this, but chainsaws aren’t very delicate tools. Which often means you end up hacking through the string and roughing up your index finger a bit more retying it. There’s a learning curve, to say the least.

Yes, this is labor-intensive work. Shaping and cutting out notches on the bales, placing each one, applying three coats of plaster, not to mention the many steps between ‘bales placed’ and plastering…whew! And keep in mind you may face challenges in obtaining financing, and working with contractors and building inspectors who have not seen a strawbale home.

But do not be deterred! Despite chain saws and government red tape, it’s rewarding work with beautiful results, and straw bale deserves serious consideration if you’re building an eco home.

There are various reasons a house can be considered ‘green.’ Straw bale construction has an enviable list of advantages:

On top of all this, there are the aesthetics…the look and feel of the final plastered wall is hug-worthy, and curves and niches can be added that make the home unique, warm and downright go-OR-geous!

If you’re intrigued and feeling inspired to dig deeper into the world of straw bale construction, I can not recommend enough spending a week with like-minded peeps, camping, eating, laughing, singing and telling jokes by a bonfire, learning, and day by day, bonding with new friends while working towards a common goal.

More than just straw and sweat built the walls of that Ann Arbor home…good energy, laughter, shared stories and full hearts now, quite literally, will surround the wonderful host family as they enjoy this incredible home for decades to come. 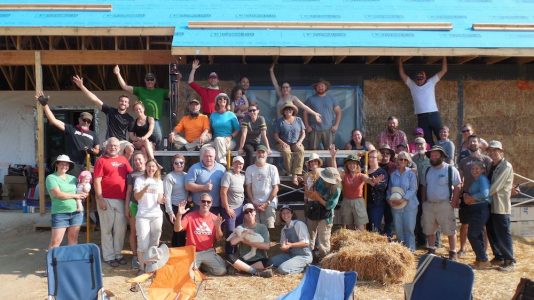 My heartfelt gratitude to Andrew Morrison, who with his humor, patience and knowledge, led an intense, fun, challenging, incredible, inspirational week!