Imagine if we built an economic system built on abundance rather than scarcity. Taking advantage of the latest digital tools, computational power, material science, biomimicry and a somewhat older idea – the commons – this new system could have the power to transform how we live and work.

Why must we do this?

For one, it is obvious that our current model of ‘take, make, dispose’ is not sustainable with finite resources. We’ve got to rethink and redesign. “System Reset” the documentary featured at our movie night event in March, features some of the leading thinkers in materials, economics, the commons movement, FabLabs, digital citizenship, urban planning and architecture, and weaves together stories of how we can use these to create a very different, prosperous future.

And of course, as we dove deep into such important topics, we nourished our minds with popcorn, beer, wine, and later pizza… 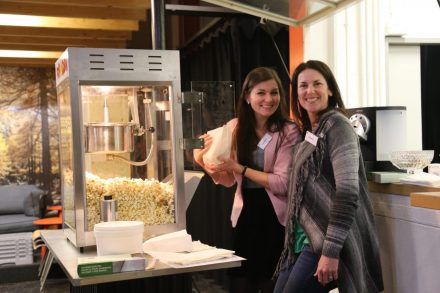 Think about what our world would be today if we had built our economy on a regenerative model, rather than extractive. It’s possible—just look out your window! If we study nature, we quickly see the easy yet ingenious ways in which it closes it’s own loop, uses every material, creates zero waste in it’s cycles. Humans can follow suit using ‘biomimicry,’ the design and production of materials, structures, and systems that are modelled on biological entities and processes.

How can we do this? One example, given by Alysia Garmulewicz, is that we rethink not so much the amount we’re producing, but what we’re producing it with. Check this out…

The amount of petrochemical plastics we’ve put into the world since 1950 is about 8 billion tons. This sounds like a lot, and because of it’s negative environmental impacts, perhaps it’s 8 billion tons too many! But when you look at the biopolymers (nature’s building blocks) produced in the biosphere every year, they dwarf that number.

So, what’s your point, Carrie?!

Cellulose is the substance that makes up most of a plant’s cell walls. Since it is made by all plants, it is probably the most abundant organic compound on earth. In fact, about 2 teraton are produced annually—that’s 2,000 billion tons! Just think if we used these materials as building blocks, what the possibilities could be! Why are we using pollutants when plentiful, renewable, easily-accessible materials that could do the same work exist all around us? Imagine the possibilities.

And it seems, people are.

Aside from being the primary building material for plants, cellulose has many others uses—for example, it has formed the basis of the world’s most abundantly printed-on material: paper.

But with our advanced technology, and breakthroughs in material research, cellulose can potentially provide a a renewable, biodegradable alternative to the polymers currently used in 3-D printing materials. And this opens up a world of possibilities.

What we’re discovering is that through research in biopolymers and technological advancements, we have the potential to essentially reinvent our model of production. With 3D printing, we can decentralize production of and access to resources, create needed products on demand, locally, use materials that are around us to do so, and design the components and materials to be made and re-made again.

Another exciting change is taking place in urban planning. We’ve set up our cities, our societies, a certain way. And this hasn’t necessarily been done efficiently or with the health of people or planet in mind. And reversing decades of urban planning decisions takes time and a compelling vision. However, it is not necessary to implement major changes in urban planning in order to improve the lives of people in cities, as the Barcelona Superblocks Initiative demonstrates.

The Barcelona Superblocks is a master plan that merged nine city blocks, and reduced mobility within. Traffic was limited to only residents coming and going. This plan has given back to the neighborhood 65-70% of public space, reduced danger from auto accidents, improved air quality due to reduced traffic…and over 50 activities were introduced for the block because the public space is now so versatile and flexible. Who wouldn’t want to live there?! Ultimately, the application of the Superblock significantly improved urban quality while reducing the environmental impacts of vehicles. It also increased the quality of life of residents and visitors, enhanced social cohesion and increased economic activity.

Things need to change, and indeed they are. New 21st-century businesses are asking different questions than in the 20th century…how can we build in as many benefits as possible into our designs? What can our enterprise do for the community, culture, the living world? What can we give back? These businesses recognise they are part of an ecosystem and each part relies on the others for success. As a member of the Impact Hub Community, it’s likely you know or are one of these movers and shakers of our future. And for that, we are grateful.

Because, folks, we need it. And we need it now. To quote from the film, Kate Raworth of Doughnut Economics: “This is the drama of our times. And of course, it is also the adventure of our times.”